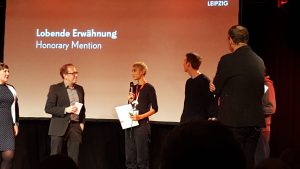 THE SECOND ATTACK celebrated its premiere in the German feature film competition of DOK Leipzig.

A total of 5 screenings took place at the festival and we were shown in the DOK educational programme:

We were also nominated for the Leipzig Ring Film Prize, the Young Eyes Film Award and the DEFA Sponsoring Prize and received a Special Mention from the ver.di Prize for Solidarity, Humanity and Fairness.